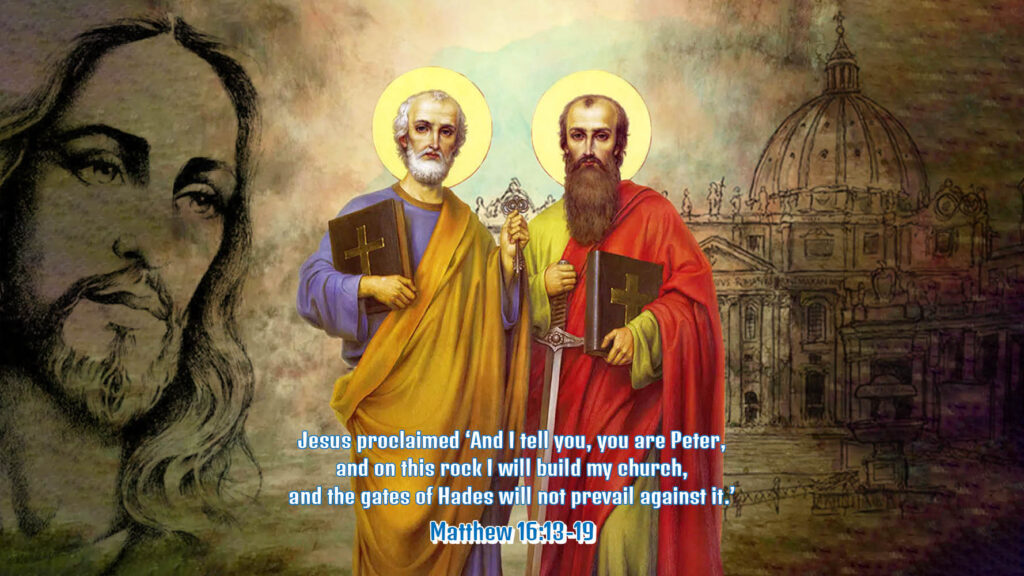 Today we celebrate the two giants of the New Testament, St. Peter and St. Paul! Both in their own way have strengthened the Church. One is not above the other. Peter is a great and lasting example for us to imitate, a servant leader to the core, filled with humility and passion for the Lord Jesus Christ. Today’s passage highlights how God blesses earnest hearts which seek God and his wisdom, not our own. Whatever we may have become in this world, God can undo it and restore us.

Peter a simpleton fishman from Galilee, compared to the high and mighty scholars from Jerusalem and from elsewhere, correctly understands Jesus. Yes, later he does deny Jesus, yet he had acquired God’s message of love and stands firm in it, and does not try to end his life, but come before God and stand before Him. The Key thing is that he understood God’s love poured out in Jesus. This we can understand by the two main truths that he proclaims about Jesus in today’s Gospel; that he is both Israel’s Hope – i.e. the Messiah as well as that Jesus is God – i.e. God’s own Son.

Saul was the epitome of the Jewish World in how he looked at Jesus. But no one can doubt his burning zeal for God. Today’s Christians, not all but quite many, on meeting an individual like Saul, will ask God to take care of Him, deal with his menace, the idea to pray for such an individual will not come to us. Yet God dealt with him the only way the only way could, and blessed Him and changed Him from Saul to Paul. Mind you it was not a literal overnight transformation. His studies and his reasoning most probably had created a storm inside of him, regarding what Jesus preached/taught, his life, and the life of the Christians, against his own understanding of religion and God. Finally, Jesus showed himself to Saul on that road to Damascus…

Today’s feast is for both the ordinary faithful and the scholar, this is the Church. There are giants like Paul in the Church, as well as the simple, both through their life and pursuit of Jesus, inspire us. Example: St. John Paul II, can be considered a modern giant like Paul, while Mother Theresa is a perfect example of Peter. Together, both these types of faiths take the Church forward.