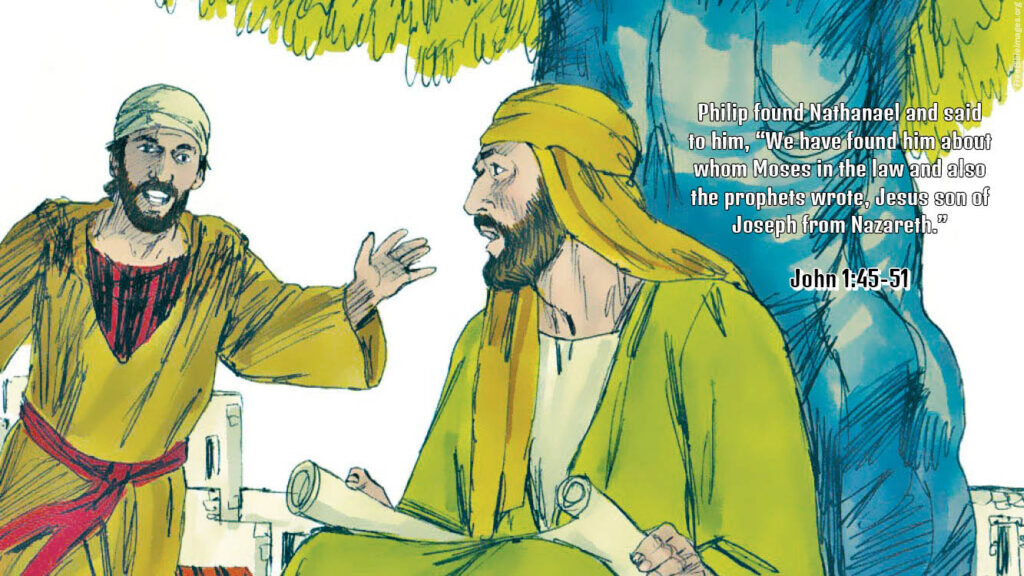 Philip found Nathanael and said to him, “We have found him about whom Moses in the law and also the prophets wrote, Jesus son of Joseph from Nazareth.”

Moses had in his farewell speech (Deuteronomy 18:15-19), spoken of a time in the future, when another Moses – a prophet like him would rise among them… much more important then himself, someone who would speak the heart of God and believing all that he said was the only way to God’s presence. The Prophets themselves also had written about the Christ, the redemption of Israel. And now John the Baptist had identified for his disciple the ‘Lamb of God who takes away the sins of the world‘. And Andrew proclaims the same to his friend Nathaniel (Bartholomew), “Nathaniel, at last we have the Messiah in our midst. The one we have been trying to identify with all our scripture study (the meaning of Sitting under the Fig Tree), prayers and spiritual pursuits (like becoming disciples of John the Baptist of frequenting his instruction sessions). Yes he is ‘Jesus son of Joseph from Nazareth'”.

Nathaniel’s response in not so much a point disagreement, but of speculation, of being cautious against false claims, because in those days there were many doing that. What he means to say is ‘ok, but is there scriptural ground for where the messiah should come from? Scripture itself speaks of the rotten northern Israel scenario and corruption, how then can the Messiah come from there? The promises of the messiah were given by prophets from Judah/Jerusalem. Prophecy claims that he would be of the linage of David? Help me understand?’

Philips response is marvellous. He is not interested in converting/convincing Nathaniel or arguing his case for Jesus. His simple and powerful and proper response is, “Come and see.” When we have the opportunity to speak to people who do not know Jesus,  we should never think of convincing or convicting them of the truth. That is the department of the Holy Spirit and Jesus, let them do the needful, because they know how in the correct sense.

In all probability, Andrew must have taken Nathaniel to where Jesus was at that time, and introduced him to Jesus as his friend. Jesus’ in welcoming Nathaniel speaks two ideas to drive away the doubts from him and answers his questions. First being ‘Israelite’, where Nathaniel understands even he was of the Jewish faith and was staying in the northern territory of Galilee, away from Jerusalem, meaning you do not need to be in Jerusalem to be of the Hebrew faith. and the promises of scripture were not only for the Jews in Jerusalem but all Israel. The Second, ‘no deceit’, meaning Jesus knew of Nathaniel’s earnest study of scripture and his desire to know God and the Messiah.

Nathaniel inquired, ‘how did he come to know this – i.e his study of scripture and his desire for God.’ Jesus answered with words similar to that from Jeremiah’s Call (Jeremiah 1:5), before Andrew invited you, I knew you. Nathaniel’s doubts melted away, he replied, “Rabbi, you are the Son of God! You are the King of Israel!”