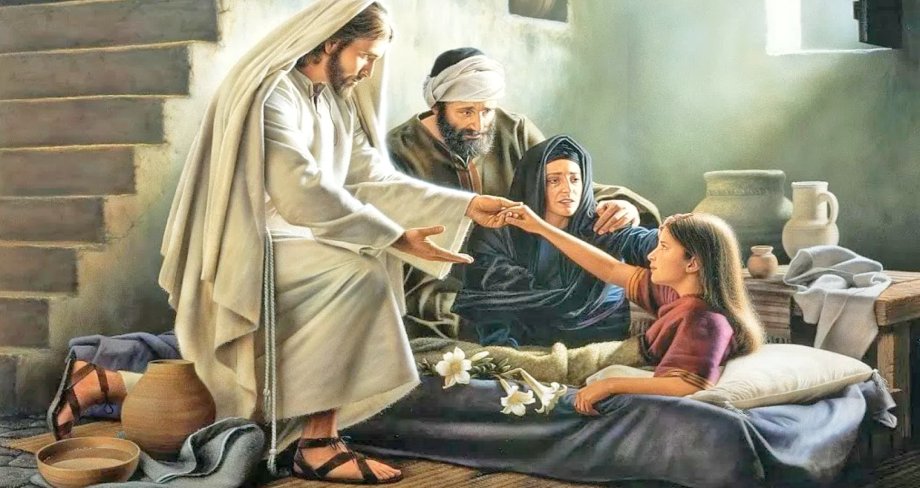 The Gospel narrative begins with Jesus again in Jewish territory and surrounded by crowds. A synagogue leader named Jairus arrives and surprisingly falls at the feet of Jesus; this is startling since the last time Jesus appeared in a synagogue the narrative ended with a plan to kill him (3:6), even though his initial teaching and works of power occured in synagogues (1:21, 23, 39). Jesus responds immediately to this poignant appeal from a father to restore health and life to his daughter who is at death’s door, and he sets off with the leader and a teeming crowd.

This narrative is abruptly interrupted by another (5:25–34) which tells a complete story of another woman’s suffering. She has been suffering from some form of vaginal bleeding for twelve years. Her disease makes her an unclean outcast in Jewish society. She is unable to participate in the covenant life of Israel. The desperate woman appears alone in public and draws on her own resources to pay the physicians.

She emerges in the story, however, as a woman of daring and initiative. She acts on hearsay about Jesus and pushes her way through the dense crowd with hope. Once she breaks through the physical barrier of the crowd and the religiosocial barrier of her ritual impurity and touches Jesus, her illness ceases and she senses the cure in her body. At that same moment Jesus feels a healing power depart from his body and speaks for the first time in either story. Jesus asks who touched him and is virtually mocked by his disciples for asking such a question. Their misunderstanding only enhances the faith of the woman. Having experienced the power of God in her own body, the woman who a moment ago seemed fearless now approaches Jesus with the religious awe that arises from contact with divine power. Unlike the disciples who answer a question with a question, the woman speaks the simple truth, and Jesus proclaims that her faith has saved or restored her and dismisses her with a blessing and a promise of continued health—in contrast perhaps to the many times when the physicians had promised health to her.

The first narrative then resumes in 5:35–43 with the comment that Jesus had better not come to Jairus’ house since the daughter had died. Having just witnessed the faith of the woman and heard Jesus’ accolade of her, the synagogue leader is exhorted to equal faith. Jesus comes to the “house,” having been once subjected to misunderstanding by the disciples (5:31), he is now mocked by the crowd for his ironic comment that the young girl is simply asleep. The very next words Jesus utters after those that elicit laughter is the command to the young girl to “rise up,” which confirms resurrection faith. The raising of Jairus’ daughter is for Mark’s readers the prototype of their own hope that their God is a God not of the dead but of the living (12:27).

The two stories are carefully woven together. Both deal with women in life-threatening situations, and both women are called “daughter” (5:22, 34). Both women are explicitly or implicitly hoping for salvation or rescue from their situation. In both narratives “faith” is important; the woman’s faith is praised (5:34) and Jairus is encouraged to have faith (5:36). In both narratives misunderstanding of Jesus’ power (5:31, 40) is followed by its dramatic manifestation (5:34, 42).

Inputs from the Sacra Pagina Series