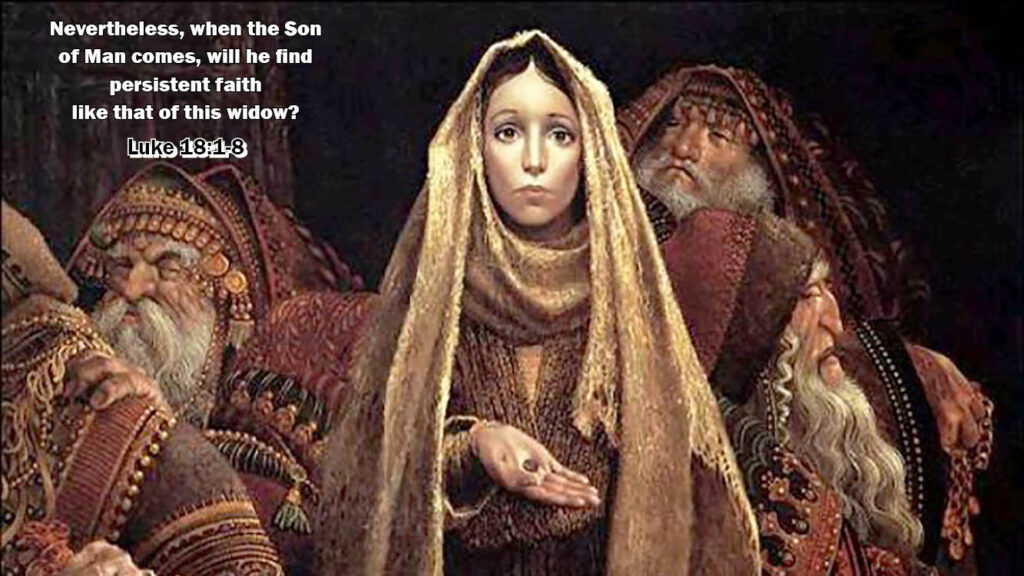 Palestine was a difficult place for widows at the time of Jesus. A poor widow would be completely destitute. In today’s Gospel we are not sure what the widow is being cheated of, but we know that the judge favours her opponent. However, we are also informed that the poor, weak widow is persistent towards getting what she deserves from the judge. This widow’s constant appeals were hurting the judge’s reputation. Whatever he had been paid wasn’t worth the hassle she was causing. He decided to grant her what she was due just to get rid of her.

Sometimes we cry, “How long, Lord?” Sometimes it seems that God will never answer. In the sentence, ” Will he keep putting them off? Jesus’ answer is firm: “He will see that they get justice, and quickly” (18:8). But it’s easy to get discouraged, disappointed. How long, Lord? How long until your will is done on earth as it is in heaven? How can you let evil go on so long?

If you read carefully Jesus’ words to his disciples, you see that his message is consistent: Stay spiritually awake and be ready, for I come in an hour that you do not expect. When we try to put his Second Coming on a calendar, we get disappointed.

Jesus has told a parable of persistence, of a widow — weak in the world’s estimation — who has won a victory because she didn’t give up hope, she doesn’t give up her plea, and finally wins the day. But what about you and me? We sometimes become so worn down and discouraged by our lives that we stop praying, stop hoping, stop expecting God to intervene. Will we be religious, church-going unbelievers, who have given up expecting an answer, whose prayers are just going through the motions? Jesus wonders. “When the Son of Man comes, will he find faith on the earth?”