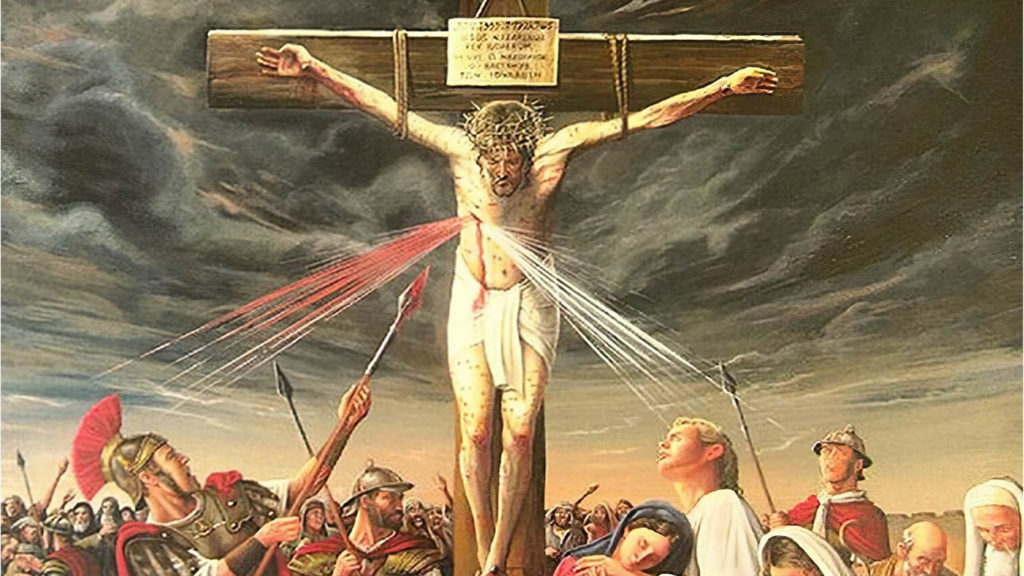 This is the climax of the whole crucifixion scene, Jesus sets the relationship between the disciple and His mother and therein initiates the beginning of the church of which we are members in this new family.  Jesus called out to John, referred as the beloved disciple whom Jesus loved, he was the youngest, and alone of the Apostles who was not a martyred.  Of all the Apostles, he alone was disciple standing with Mary and the other women, the synoptic Gospels leave this out.  Mary remained a loyal disciple to her son and even today intercedes for us before her son and pushes our causes forward as she did at the wedding at Cana.

The words “I thirst”, it refer to his physical need and the wine he accepts has a deeper meaning. It could refer to His thirsts to save all souls. The vinegar (coarse form of wine) soaked sponge marks the completion of the New Passover – The Eucharist. Passover traditions had 4 cups of wines which needed to be drunk by those celebration the Passover. The Gospels do not show Jesus drinking the Fourth Cup. Scholars say with drinking of this coarse vinegar-wine, Jesus completes the New Passover, hence he says “it is finished” which meant the task given by His Father has been completed and bowing his head He gave up his spirit.

As it was a day of preparation for the Sabbath, the Jews did not want the bodies to remain on the cross, they asked Pilate to break the legs to fasten the death.  The legs of the other two who were crucified were broken as the were alive and when they come to Jesus the saw that He had died, they spared him, but one of the soldiers pierced him in his side to confirm that he is dead. As water and blood came out of his side, this may refer to the life that comes from Jesus; blood as a symbol of the Eucharist and water as a symbol of Baptism.

The First Adam was afraid to lay down his life for his Bride. Now Jesus the Final/Last/New Adam gave up his life to save his bride the Church. And as if in reverse order of the Creation Story, in Jesus’ death is born his Bride the Church.

Today we see that though Churches in most places are shut, there is a church opened up in every home.  Though we are separated, we are one in spirit.  Jesus had predicted this day and told that a day will come when we will not be able to attend church and pray in spirit.  Let us not waste our time given as a grace to remain at home and make maximum use by making amends in our relationships with each other at home and outside and pray to have a much better place here on earth.

24/May/2021 Christian Jesus’ Side Is Pierced John 19:25b-34 Meditation Prayer Solemnity: Blessed Virgin Mary - Mother of the Church Today's Gospel