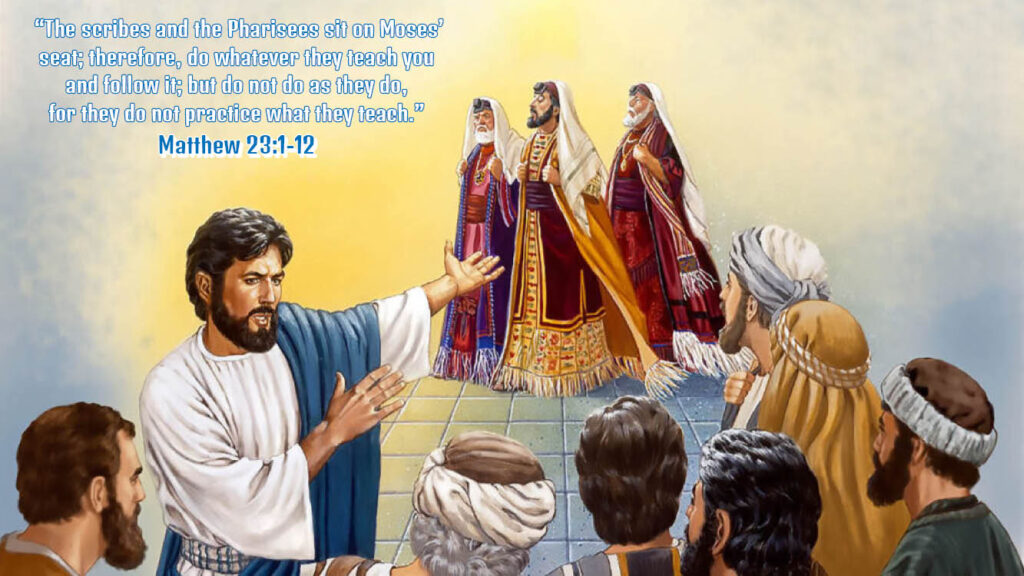 God gave the Law (Ten Commandments) through Moses and guided the Jewish people to live their lives in holiness and fullness, in the world. God had chosen Israel from the people of the world and set them aside to be an example for all nations. The Israel people, initially, obeyed Gods commands but eventually failed. As a result they were taken into exile. When they did return from exile, they reflected on the reasons for their exile, they realised they had broken the Law/Covenant in many ways. The breaking of these resulted in the penalties attached to breaking them. The main leaders realised observing the Law strictly was the only way forward to avoid any experiences like exile, hence they forced people to follow it, strictly. In Jesus’ time, the Pharisees and teachers of the Laws had authority like Moses to guide and teach the people. But the problem here was of lip service, understanding and desire. The Pharisees themselves did keep the Law, but in a literal what is written, is what needs to be done kind of way, they were proud and trumpeted about their personal ‘holy’ lifestyle, and forced the others also to do so. They also kept the requirements of the Law in a way they could profit and not beak the Law. The understanding of the Law and the spirit of the Law (Mercy, Compassion, Love) were missing in what they taught and forced other to live. There lacked in relationship with this God, and that is what they propagated. Pharisees fostering a relationship between the people and God, which would have helped them understand the Law in the proper way, and helped them walk in right ways, they preferred to seat in the high exalted positions, that would give them fame, power and  rich. Thus Pharisee failed to achieve the responsibility of bringing people close to God.

Jesus warns his disciple and encourages them to focus on the mission of bringing people close to God. To achieve the mission Jesus taught them the mantra ie  serve the people with love and humility (eg. Jesus showed this by washing their feet). This mantra helps us achieve our goal and aim in life. Let’s apply this mantra and live a successful life.