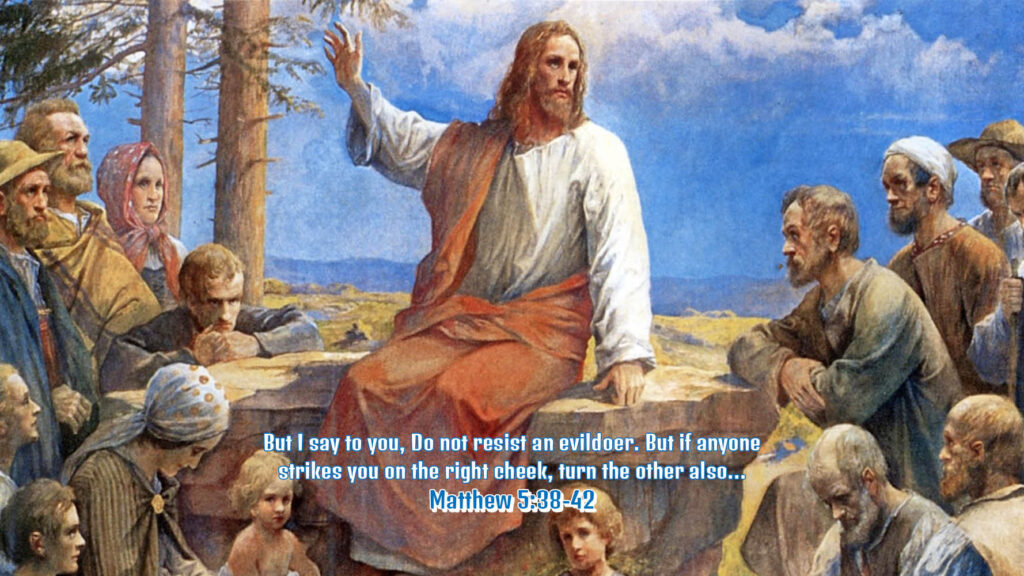 The above passage does not need any explanation.  This was told to me when I was less then 10 years old.  When I had complained to my dad that my friend hit me, he told me to go and tell your friend to hit me again on the other side.  I was so hurt and felt that my dad instead of confronting my friend is giving me this advice and so I thought that my dad did not love me.

Later in life I understood how powerful these words are when I started reading and listening the Bible and when I read Romans, St Paul writes that when you do good to your evildoer, it is like keeping charcoal on his/her head.  And from then I changed my outlook to life.

As per the early laws followed by Jews and Romans equal treatment had to be given, an eye for an eye and tooth for a tooth.  It was a legal rule and was introduced for humanitarian reasons to limit revenge, but later the rabbis also felt it too harsh and began penalising fines.

Jesus’ teaching completely contrasts on love of enemies. When he said “do not resist evil” he meant to avoid physical violence or damages.  His teaching is a strategy for winning hearts, avoid litigation and not for passive resignation or indifference to evil.

Jesus’ goal was to shame the opponent into a change of heart.  He was stressing on the concept of forgiveness and wanted his disciples to take the first step towards reconciliation and that the outcome would be beautiful.  Similarly, the theme of giving to beggars and borrowers goes beyond the scope of non-resistance to evil to advocate general kindness, forbearance, generosity, and an open attitude toward people.

Its just peace that Jesus wants in the world, he wants to see everyone happy and joyful and to attain this state we all need to follow his teachings.

Let us reflect on the words of Jesus and check our own lives and amend the ways that are not according to his teachings.  Let us pray to Jesus to give us the grace to understand his teachings and to follow it diligently to make this world a better place.