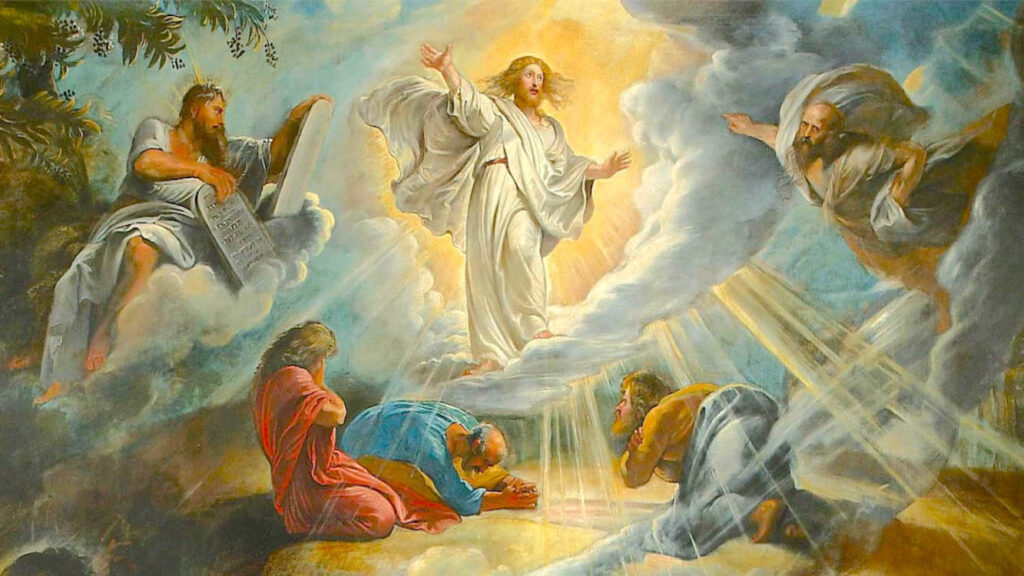 In today’s Gospel the emphasis throughout, is on the dazzling attestation of Jesus’ identity. Jesus has a radiant face reminiscent to that of Moses when he encounter’s God on Mount Sinai. But the description of the change in Jesus’ clothes distinguishes him from Moses significantly: Jesus’ clothes become “dazzling white,” words Luke uses to describe angelic figures often. However, Jesus is not experiencing God’s glory like Moses but rather He is the source of divinity Himself.

The appearance of Moses and Elijah adds to the attestation of Jesus’ identity as embodying “the Law and the Prophets.”  While Jesus was the ‘prophet like Moses’ predicted by Moses himself, Elijah was the prophet associated with the coming of the Day of the Lord. Their appearance thus points to Jesus fulfilling specific prophecies associated with them as well as the more general notion of Jesus as the fulfillment of all of scripture.

The highlight of this episode is the attestation of Jesus’ identity by the Heavenly Father Himself. During the Baptism of Jesus, the Father directly spoke to His Son, while now the message is for the disciples to hear the Father saying – “This is my Son”.  Another difference between the two episodes is that during Baptism the voice came from heaven while at the transfiguration the voice was heard from the cloud that surrounded them, symbolizing the intense personal experience with the Father.

A critical point to observe in the transfiguration account is that prayer for Jesus involved, at times, a dramatic encounter of God’s presence. Prayer was not merely speaking words to God but was a truly spiritual experience of God. Thus while we should no doubt not expect to have experiences like that of Jesus in the transfiguration on a regular basis in prayer, the transfiguration episode should challenge us to seek something higher in prayer than speaking mere words in the hope that God might possibly somehow listen to us. Prayer should be seeking the powerful presence of God in our lives.