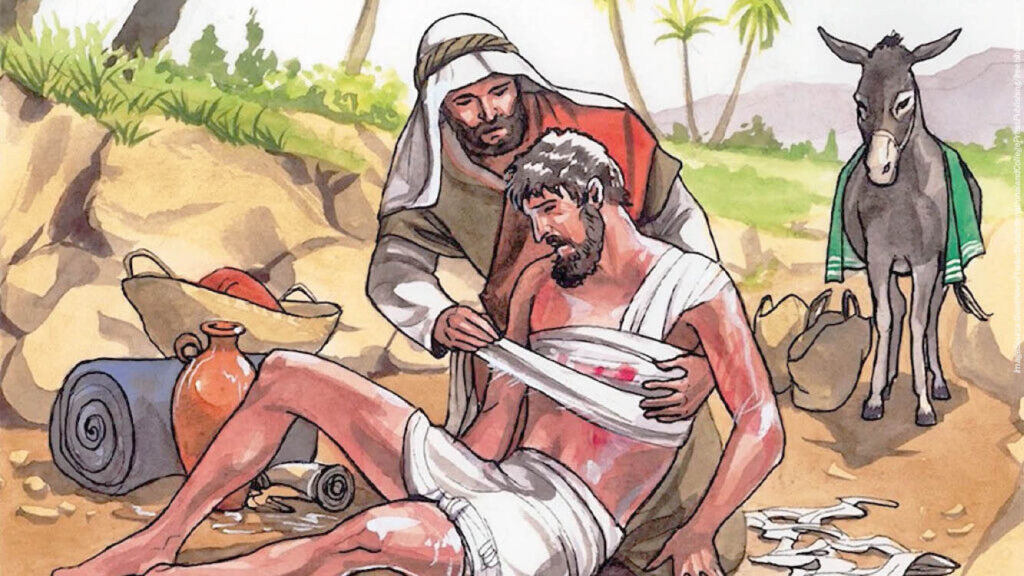 While this passage provides a powerful lesson about mercy to the needy, it also proclaims the inclusion of non-Jews  who observe the law and can enter into eternal life.

When the lawyer replies to Jesus’ counter question that he follows all the laws, Jesus emphasizes that just knowing the laws is not important, but action is necessary. By narrating the story of the Good Samaritan helping the man who was beaten up on his way to Jericho Jesus explains in simple words that works go along with the Law.  The Jews considered the Samaritans to be of low esteem as most of the them had wrong traditions of worshipping Yahweh, and had intermingled with people of other ethnicity and religion.  Many had inter-religion marriages which were forbidden according to the Law and they did not lead holy lives as per the Jews.

Again Jericho also was not a great place to visit, so Jesus depicts the man traveling from Jerusalem to Jericho, from a holy place to a place where many would not like to go.  Jesus through this story clearly explains that to enter into heaven, all this does not matter, where a person lives, what is his or her religion, how rich or how poor he/she is.  What God ultimately sees in a person is the heart.  A heart as pure as a child, which melts seeing others in need and runs to help them.

Another question of importance asked by the lawyer is “who is my neighbour”.  Jesus’ counter question at the end of the story to the lawyer is to decide who is the the neighbour in the story. Even the lawyer replied saying it was the Samaritan as he knew that the Priest and the Levite (they took care of the temple work) did not want to defile themselves by helping the unclean wounded man and moved on to do their duties.

This story reminds me of Mother Theresa who was one day on her way to meet Pope John Paul II, when he was visiting India. She stopped her vehicle to attend to a man who was in bad condition on the road. And when asked she said she met Christ in the man on the road.

How do I react when we are called to serve, starting from our own homes, relatives, neighbours, society.  Let us pray to Jesus to give us a heart of a child filled with compassion for others to love and serve and abide to his words, “Go and do likewise”.