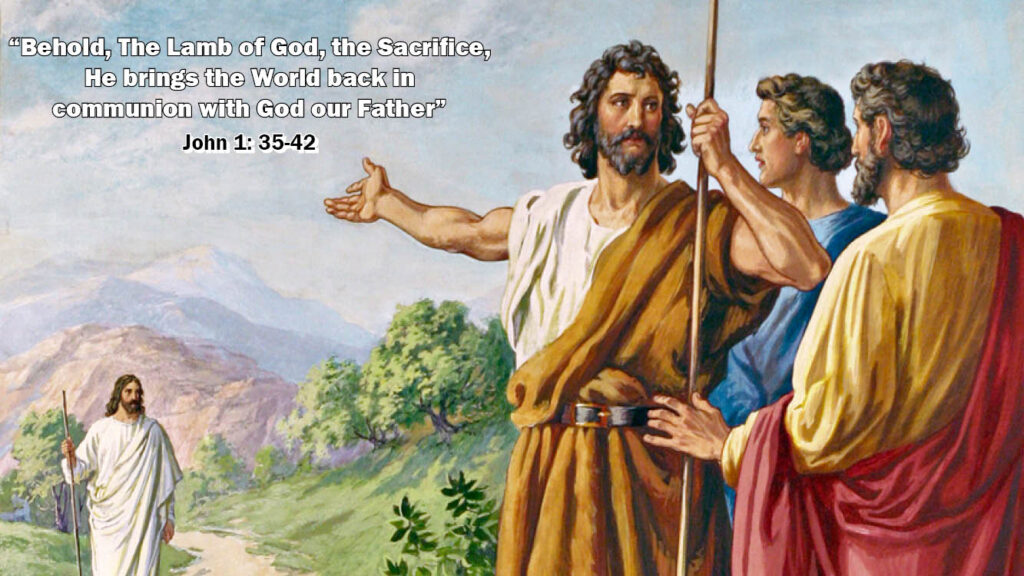 I was just listening to Fr. Mike Schmitz’s Catechism In A Year Podcast, where Jeff Cavins was explaining what is Biblical Faith. And he says that just to say I believe is neither belief not faith. But to accept it as part of your life, action your belief in your life is Biblical faith. This is the Faith/believing that is mentioned in John 3:16 – God so loved the world that he gave his only Son, so whoever believes in Him, may have eternal life. And this is confirmed in the same chapter in verse 36, where it says to believe in Jesus also means to obey and live his teachings and directions for our lives. James in his Epistle puts it in other words, ‘everyone can just say the words, ‘I Believe’, yet belief He say is to accept and live according to what you have consciously and verbally accepted as what you believe.

In today’s Gospel there is such a moment… John the Baptist mentions, on seeing the Messiah in the distance, to his disciples, there goes the Lamb of God – the one who is set to redeem mankind. Probably all gathered over there were John the Baptist’s Disciples, but they being his disciples in their conscious minds must have believed his words…, but not truly believed with their hearts, because only two, the Gospel text says believed in the true sense, they detached themselves from John’s group, and went to Jesus… That is faith, that is what all of us need to do in our pursuit of God. And when we pursue God, we cannot have our feet in two boats, saying what if this does not work, then let me have safety plans… Belief is abandoning ourselves to what we believe. And this is what those two disciples did.

And what was Jesus’ marvellous response to the two disciples who had an equally wonderful question of faith? They called Him ‘Rabbi – Teacher’, where do you stay? Meaning we want to make you our teacher and we want to live with you and make our home with you, and build our lives on what you have to offer us, because we believe – you are the Messiah. And Jesus answered, come and see for yourself, you are welcome, come and see, stay for a while and then cement/affirm your belief.

Jesus says this to all of us, ‘Come and See’. we need to accept that invitation, if we call ourselves Christians. Believe His Divinity – His Incarnation – His Saving of us, we need to go and see by making our home with/in Him…