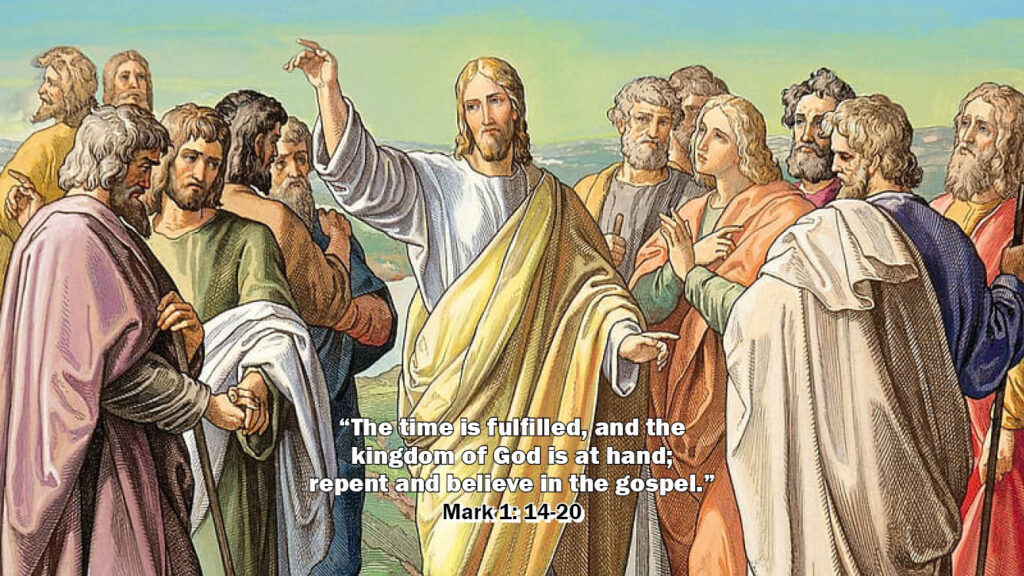 Mark the first one to write the Gospel did it in a hurry as he was in Rome and there was tremendous persecution and hence, fearing that his death was near.  In the first Chapter itself the baptism, Jesus’ temptation in wilderness and John’s arrest is covered.

With the arrest of John, Jesus expedites his mission and leaving the place of turmoil starts preaching in Galilee and selecting the Apostles who will help him fulfil the purpose he came down on earth.  Jesus could have chosen learned men who were well versed with the scriptures like the Pharisees and Scribes, but he knew that these men were hardened at heart, and it would be difficult for Jesus to teach them new ways of life as they were very rigid.  Jesus chooses the very simple and hardworking people who were simple and open to accept Jesus’ teachings.  He starts his search with choosing the fishermen working at sea and tells them that from now onwards they would be fishers of men.  What he meant was that Jesus would train them to follow the Way and later train others to follow.  The two set of brothers seemed to be established in their fishing business as they owned nets and had employees working with them

It was the “Yes” of these apostles which made the difference and also Jesus’ compelling request to join him.  In the Jewish tradition the students went up to the teachers but in this case the Master calls out to the students.  The first disciples were aware of the coming of Messiah and heard of the works of Jesus that they immediately agreed to leave their business and occupation and go with Jesus.  Jesus did not choose the educated and scholars of scriptures, but he chose the ones who did not know much, but had to train them from scratch.  In the bible we read, the Apostles were naïve till Jesus died and rose again.  Only after they were filled with Holy Spirit, they understood all that Jesus spoke and were then empowered to speak, work miracles and even lay their lives.

Today we are living complacent lives and many a times do not want to hear the call we receive.  Not necessary that we have to leave our jobs, homes or family but may be answer to a request or a cry of our family members or our neighbours.  We are too busy with our own work or these days the mobile.

Let us pray to our Lord to give us the grace to listen to his voice to do our part of the work entrusted to us.  It could be to help in our own homes or in the neighbourhood or in the church, be ready at all times to serve the Lord.