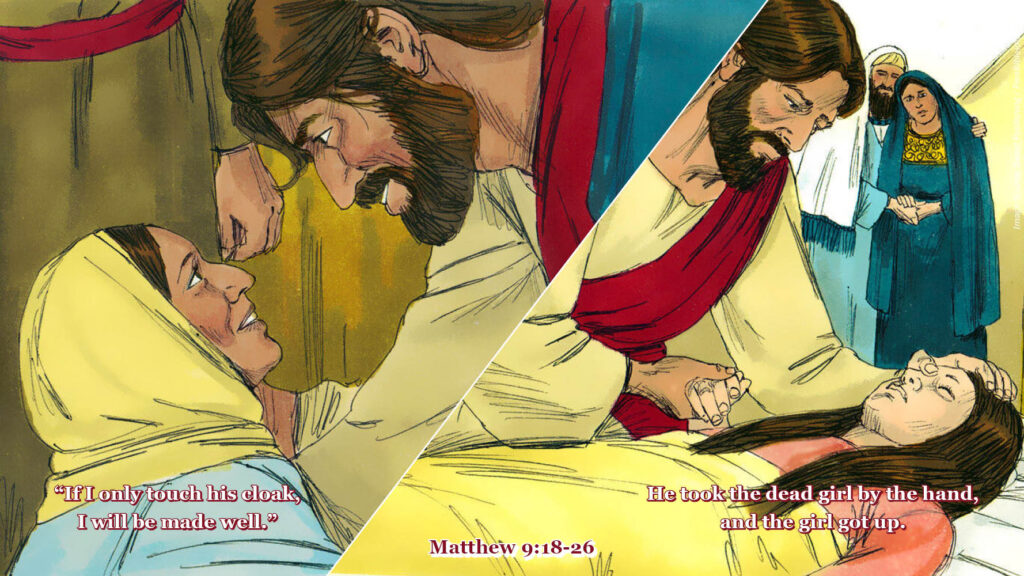 This is the shortened version of Mark’s Gospel with some changes, read Mark 5:21-43.  We see the healing of two women, one a minor and another who suffered of haemorrhage (continuous bleeding) for twelve years.

While in Mark, the child is said to be serious and her father who is a ruler, named Jairus comes in search of Jesus to take him to his house to pray for his daughter who is very serious. And Mathew heightens the ruler’s faith by having him say that his daughter is already dead. This ruler, a person of high position and the other women who bled for 12 long years must have tried all other medication and options and out of desperation come to Jesus as last hope.  The older women must have also been marginalised as she was termed unclean and could not move out in public place and touch anyone.  Frail as she would have been, she comes covered fully to avoid being recognised, tries to make an attempt to touch the hem of Jesus’ garment so that no one comes to know that she touched him as the crowd around him would object to her being part of the crowd and more so, touching Jesus.  This needed great courage as if caught she could have been beaten up.

Jesus does not get angry but immediately feels the power going out of him and stops and tells her that from that very moment she is healed instantly.  As this healing is sandwiched between the ruler’s request and healing of his daughter, Jairus’ faith must have doubly increased.

And when Jesus reaches the ruler’s house, he asks the hired flute players to move out of the place as it was the custom to play the flute when a person dies.  But here the ruler’s faith is commendable, not to lose hope even when his daughter dies, he continues to persist and goes along with Jesus even when the crowd outside his house laugh at Jesus and him.

Many a times we face situations wherein we are laughed at and when we are faced with sickness and crisis.  Let us not lose hope and continue to look at Jesus and have trust I him and believe that he works only for our good.