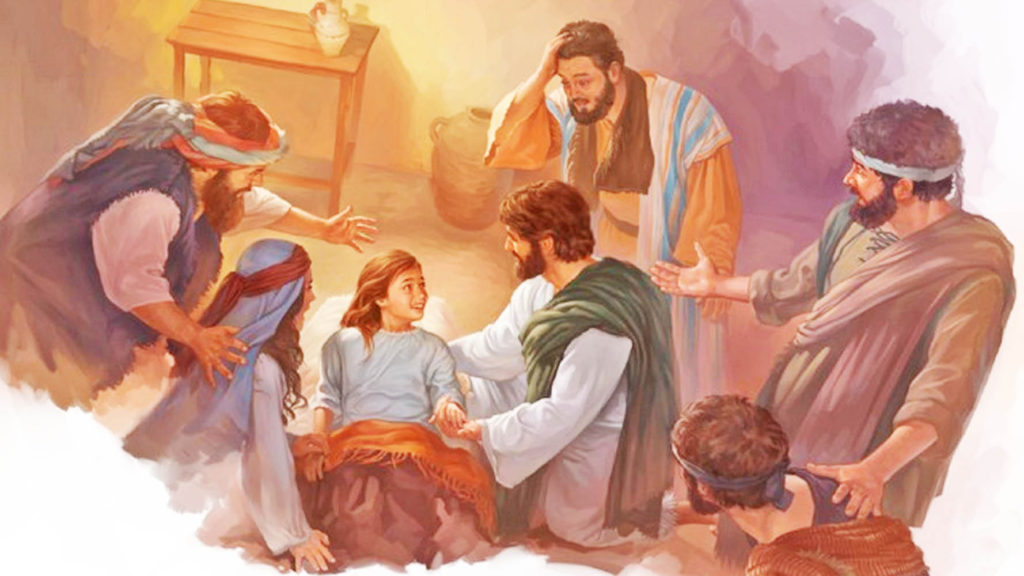 We find two healings in today’s passage, the healing of woman suffering for twelve years is sandwiched in the middle of the raising up of the ruler’s daughter. This was one of the style of writings in those days.  What tremendous faith we find in both the cases.

The ruler who must have been a person with such a high position and standing in the society for whom to come down to the level of going in search of Jesus himself, when in such a desperate situation, probably his only child who lay dead at home. (in other Gospels, the news of the death is given later to him, but Mathew to heighten the rulers faith might have written that his daughter is already dead). When Jesus reaches his house, the preparation for the funeral was already underway as the flute players were there and a huge crowd had gathered outside the house.  Though they laugh at Jesus, he does not stop there, he walks in with the girls parents and his disciples, and with his touch the girl rises from the dead.

The woman who was suffering for 12 years and by now must have been so weak that probably she must have hardly been able to walk.  During these years she might have not left any table unturned, tried every medicine, met many physicians and Jesus must have been her last hope.  For the Jews, since she was continuously menstruating, she was perpetually unclean.  Being unclean no one is supposed to touch her but her faith was so great that she knew that just one touch and she would be healed.  She picked up all courage, hid her identity, covered herself fully to come out in the open, struggled in between the crowd to just manage to touch the hem of Jesus’ garment.  Jesus felt the touch and the release of power which healed the woman immediately and completely.

We see tremendous faith in both healings.  Similarly, Jesus knows our every struggle, He has been waiting for us to touch him, feel him with complete faith just like this woman, but we being human rely more on our own efforts, knowledge or power.  Let’s ask Jesus to increase our faith to the level of the ruler and the woman who came to him as a last resort knowing nothing else and no one else will hear their plea and call out to Jesus.  In the case of the woman, she takes the initiative to touch Jesus’ garment.  In the girl’s case her father’s faith heals her.  So don’t lose hope, continue seeking our Lord, Saviour and Healer