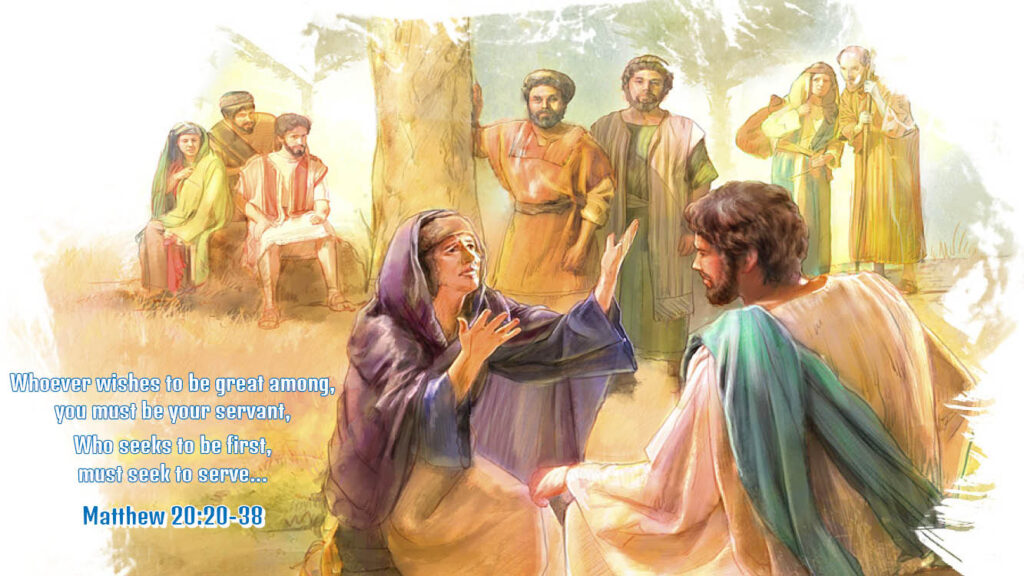 The understanding of the Jews from the Scriptures, that’s the Old Testament was that they would receive the Messiah.  And they had been waiting for about 400 years for him and were expecting the Messiah who would come as a king, on horseback and with power and might to fight nations and save the people from the Roman Empire whom they were under at the time of Jesus.

Seeing the miracles and listening to his teaching many started following Jesus but still they had the hope that they would see him as a king one day.  They did not know that Jesus was speaking of the Kingdom of Heaven.

Like any mother, mother of James and John wanted to ensure the highest possible position in the kingdom of Jesus so takes all courage to ask Jesus. She felt her sons were the best and was not willing to accept anything less. And infact the sons must have pushed their mother forward to recommend their names.

For sure they did not know what cup Jesus was asking them to drink, the cup of suffering which they were not prepared to have at that moment but eventually both brothers suffered tremendous persecution and is mentioned in the bible that James was killed by the sword of Herod and became the first Apostle to be martyred.  John though went to similar trials, was banished at an Island called Patmos and later freed and died a natural death.

Jesus explains to them that in pagan world the leader portrays authority, but here they will have to first serve as even the Master himself came down to earth not to be served but serve.

Soon after this followed the healing of the two blind men who Jesus has compassion and agrees to heal them.

The lesson we can learn from Salome, the mother of James and John is the faithfulness in which she displayed in following Jesus. She raised both her sons to be dedicated disciples of Jesus who were both in the center of the life of Jesus sharing in the ministry. We pray that we are able to start now in our walk with Jesus and be faithful to Him because He is faithful to us.