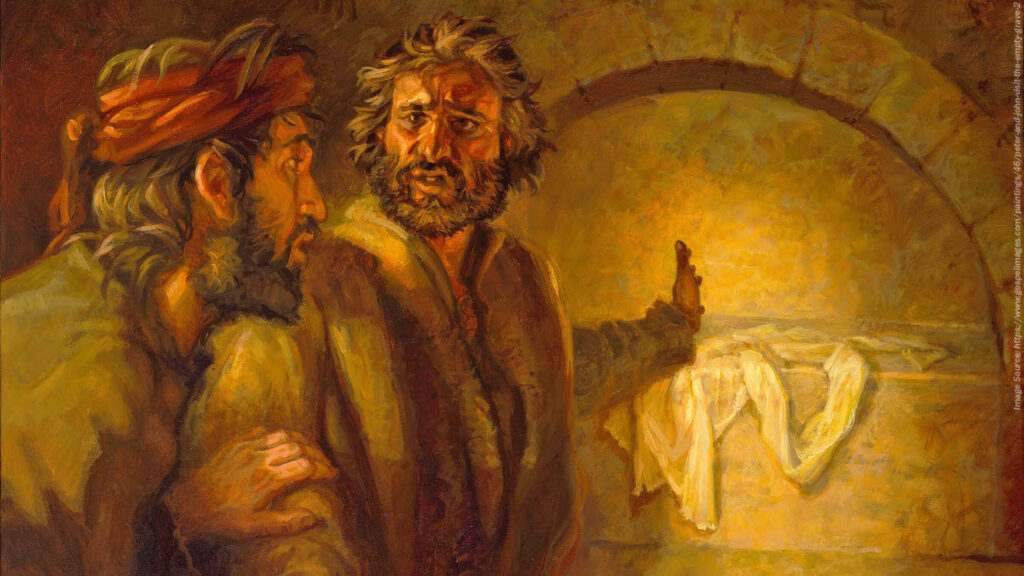 In all the four Gospels we find the one to witness the stone rolled away and the empty tomb first is Mary Magdelene.  In those days a woman was not given the respect and honour that they deserved.  They were considered much lower than the men and only meant to serve the men and the family.  And her word was never taken seriously as they were believed only to indulge in gossip and loose talks.

Even though Mary was part of the troupe that walked with Jesus and the disciples after her being delivered from seven demons, the disciples still did not believe what Mary said.  Though the other three Gospels do not mention that the apostles ran immediately to confirm the same, John has given the actual account of the sequence as he was one of them ( the beloved ) who ran to the tomb.

Mary became the first to witness the empty tomb and the risen Lord as Jesus appeared to her first as written in following verses (14-17) of John’s Gospel and she also became the first evangelist.  She announced the news to the apostles.  Jesus gave her the honour and so her name appears in all the four Gospels and will be remember ever after.

We also notice the disciple John showing respect to Peter being an elder and the closest to Jesus.  John being the youngest ran and reached first to the tomb, but he stops to let Peter enter the tomb first.  Peter notices the napkin that was on the head of Jesus’ body neatly rolled up and kept away from the linen cloth, a sign that Jesus is coming again.  It happened that after supper if the master gets up from the dining table leaving his napkin folded, it meant that he has not yet done and will return to have the food.  Peter must have sensed this and told John of the same and the classic words of John that he saw and believed.

Today, we believe not because we have seen, but we have read heard and experienced the love of Jesus and so we all are waiting for the second coming of Jesus.  But are we prepared for the same?

Even today, women in many places are treated lowly and the men still have to realise that God has made both man and woman equal.  Both have the freedom to choose, to live and to dream.  Let us pray that before the coming of Jesus, he is known to all mankind and all are saved by his mercy and grace.

27 December 2021 Christian John 20:2-8 Meditation Peter and John at the Tomb of Jesus Prayer