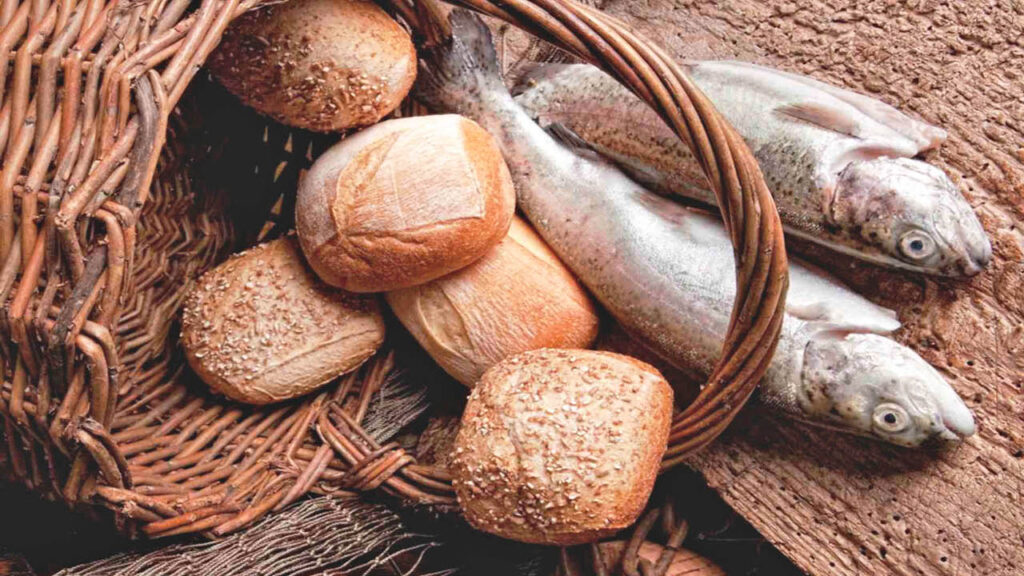 Jesus was in immense grief on hearing the news of the death of his cousin John the Baptist by King Herod on the request of Herodias’ daughter.  He must have been feeling so miserable and wanted to spend some time by himself.  But crowds followed him wherever he went as by now Jesus’ fame was increasing.

Jesus takes a boat and reaches the other side to be alone, but the crowd also reaches there on foot through the various towns.  Jesus does not ask them to leave, he feels sorry for them and heals the sick.  We see his humanity in these two incidents.  His sorrow on the death of his cousin and his compassion on seeing the people who walked miles on foot leading to healing the sick.

His compassion does not end there, he asks his disciples who wanted the crowds to return as it was getting late, to make them sit and arrange for food when there was nothing available other than just five loaves of bread and two fish while the crowd was more than 5000 not counting the women and children. By asking them to feed the crowd, Jesus was training them to have self-confidence and take initiative and to be servant leaders.

Jesus performs one of the greatest miracles which appears in all the four Gospels, a very important sign. Similar miracles related to food are also described in the Old Testament when Elisha multiplies the oil and bread and when God provides the Israelites with quail, manna in the desert while they were travelling to the promised land.

Jesus followed his usual action before having daily meals where he blessed, broke and gave the bread.  But this formula also points forward to the Last Supper and later to the Eucharist.  This has become the main event of the Eucharist today, the breaking and sharing of bread and wine.

The crowds represent all of Israel as the 12 baskets of bread that remain and the 12 disciples represent the 12 tribes of Israel.

Through this miracle, Jesus teaches us that we should not worry much about our food and our daily needs.  There is abundance in God’s kingdom when we rely on his providence and share what we have with everyone.