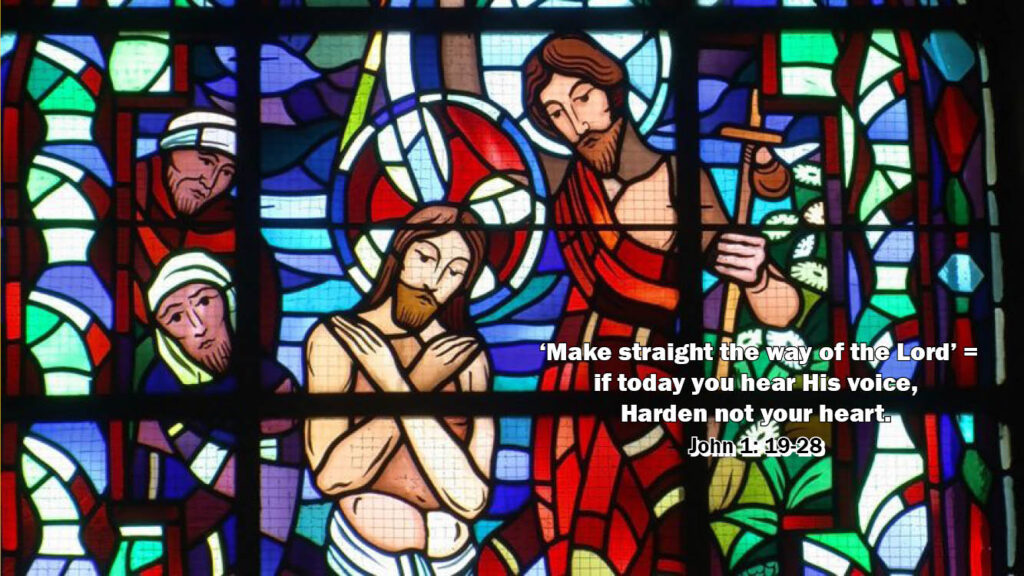 Jesus commenting at a later time has high praise for John the Baptist, the reasons for this are evident in today’s Gospel. Coming as a prophet when he did come, John was highly accepted and revered, even by those who did not want to listen to him, or accept him. He came at a time when for 400 hundred years there was no connect to God through the office of prophets. Again they were all expecting the Messiah because of what the Book of Daniel predicted. Because of all these things, John held sway over the peoples minds, when he did come on the scene as a prophet. He confronted those in the wrong – ‘Hee mend your ways, do you want to be found wanting or rejecting the Messiah’. We know he definitely was brutal to the Pharisees, calling them a brood of vipers. He even confronted Herod for his illegitimate marriage.

Yet what we see today is his general disposition in life of ‘humility’. As far as how he was conducting himself is concerned, he was already doing things according to what Jesus would himself do later. Like Jesus; he does not directly call attention to himself. He was the Elijah, yet he calls himself a lowly voice, calling attention to the coming of the Messiah, The Messiah was important, not he – John. Again his message can be mis-understood as I did, previously… He is not calling for spring cleaning of hearts and mending of ways. He is calling for us to open our hearts for the coming of the Messiah. We may have run miles away from God, we may be deep in sin, but now is the opportunity to right your relationship with God – make room for God, He is coming – don’t shut him out in a stable, welcome Him in the warmth of your life.

Finally, he does identify himself, but as the unworthy one, the one who is asking for people to ready their hearts (by baptising them), to become ready (thus indirectly acknowledging his role as that of Elijah), for the Master of the House, and not be found wanting on the day God will be among them. At another instance he will also comment that the Messiah should increase in the hearts of all people, not he and his ministry, they should fade away… He realised his own sinfulness because he knew that he as being part of sinful humanity was not worthy to even untie the sandal of the Messiah-King. So much truth, honesty and sincerity in his life.

Yesterday we celebrated Mary the Mother of God, who is the best role model in how to engage and be in a relationship with God, today we are reflecting on John the Baptist who is echoing many of Mary’s ways of humility and gratitude. Let us reflect, and imitate both of them in our pursuit of God=Happiness=Peace.