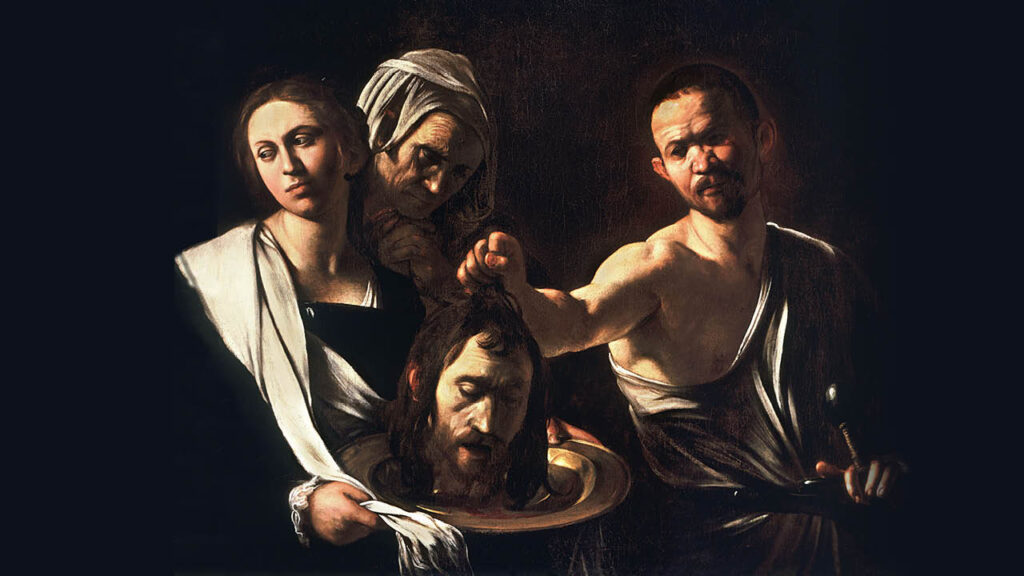 1) The Death of John the Baptist.
2) The sense of guilt of King Herod,
3) The Oath King Herod takes.

1) John the Baptist was the last prophet sent to the people of Israel, and his responsibility was to prepare a way for the Lord (saviour). Like prophet Elijah he stood tall for God and spoke the truth and condemned people for their sin privately and publicly. in response many people repented and prepare themselves to be worth to welcome the Saviour. To mark this inner conversion and repentance, he baptised the people.. The baptism which he gave was baptism of repentance. Similarly he too condemned King Herod a custodian of Israel, for his sin of adultery. This resulted in John the Baptist being arrested and eventually being beheaded in prison, by King Herod.

The lesson we learnt from the life of John the Baptist : as per bible verse Ephesian 4:1 “lead a life worthy of the calling to which you have been called”. That is,  like John the Baptist, to lead our lives as per our calling received from God and make it pleasing to God. Do the work assigned to you wholeheartedly, do not comprise your way of life for the sake of others, be justice and speak the truth, do your work conscientiously and fear the Lord, for he will take care of you. Blood shed by many martyr in the early church has become a seed for today’s church and the church grows during persecution, so earnestly stand for God.

2) After the death of John the Baptist, Jesus started his ministry, beginning at Galilee and in the surrounding neighbourhood, and he became the talk of all the people, because his fame as a wise teacher and miracle worker spread all over. Many miracles and wonders took place in the city and King Herod came to know about Jesus and his work. King Herod’s conscience, made him remember John the Baptist, and rebuked him, “you have killed an innocent person but God has raised him up,” with this feeling of guilt, looked forward to seeing Jesus, to see if he is was the same person.

In our life if we do any sin or mistake, knowingly or unknowingly to others, let’s seek our Lord and ask him to take away our sense of guilt, if not it will become an inner wound and damage our soul and body. Guilt drove Judas to suicide, whereas Peter approach Jesus to receive forgiveness and have his guilt taken away.

3) King Herod foolishly made an oath at his birthday party as he was pleased by Herodias daughter for her dancing at the party. King invited her to ask anything on this special occasion, and he would give it to her. She was prompted by her mother to ask for John the Baptist head, as revenge for all the finger pointing he had done to her and Herod, for their forbidden relationship. Initially Herod did not want to say John the Baptist, because he himself believed him to be a prophet, as did all the people. But the foolish and unthinking oath he had taken before his court and guests compelled him finally execute John the Baptist.

Yes friends we have to be grounded in humility. Humility is the mark of a Christian. In biblical times, breaking an oath meant death (look up the meaning of Covenants), and taking an oath/vow was a serious matter. So too today, do not take oaths in excitement or anger, and especially making conditional vows to God are a big no-no, because it reflects on your own foolish understand of God’s love and care for you. Read and reflect on Matthew 6 – the Our Father (5-14) and Do Not Worry (25-34), to understand God’s Father Heart. Another example from bible about foolish vows is from the Old Testament Book of Judges (11:1-31), Jephthah made a vow to the Lord if he gave him victory in the battle, then he Jephthah would give him anything that came first to meet him, after the battle, as a burnt offering. After the battle his only daughter came out to meet him, he was shattered and cried but eventually honoured his vow.

Let’s pray to the Holy Spirit to help us to live a holy life like John the Baptist.